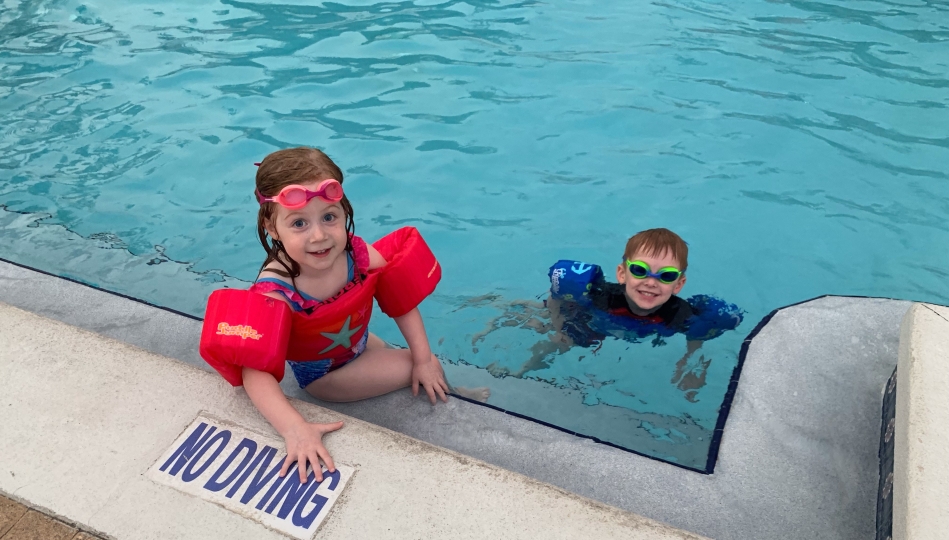 Well, we did it. We went to Disney World.

We drove with six people in our minivan (I love my minivan). The kids and I drove last Saturday to Indy, where we spent the afternoon and evening with my family. Then we woke the kids up at 3:30 am to drive straight down to Orlando. Pro tip right here, though: the kids did not simply go back to sleep once they were in the car.

Before we left, though, we went to Jeff’s grave. That Friday afternoon, the kids and I met Barb and Randy there. We wanted to wish him a happy Father’s Day.

For Mother’s Day and Father’s Day, the teachers at Jake and Kate’s school help the kids make presents. They’re adorable. I made sure to tell their teachers ahead of time: I want the kids to still make a present for Jeff every year. They still have a dad. This year, Jake’s present was a mason jar, filled with LEGO bricks. The message, with Jake’s name handwritten name reads: “Dad, I love building memories with you.”

On one hand, it kills me that he isn’t making memories with his dad anymore. And on the other hand, I am so thankful that he has the ones he does.

That morning, I had a minute without kids, and I went to Jeff’s grave by myself. I sat on it, and cried. I thought about how I’ll eventually be there too… and try as I might, I cannot imagine it. It feels so far away. And then I thought about how that must have felt for Jeff. One day, he was training for a triathlon; the next day, he woke up yellow. Boom. Done. Cancer.

Before we left for Disney, people told me that it would probably be hard. But I didn’t expect it to be. I was with my aunt, uncle, and cousin, who are super close to my kids, and I knew that if my kids did something – good or bad – and I looked at them for confirmation, acceptance, shared joy… they would get it. I expected it to be happy, and it was.

I only got emotional a few times. Watching Kate do anything with princesses… her eyes and whole body… omigod. I cried. I cried watching her put her little hand out, at the end of the Frozen Sing Along, as ‘snow’ came down on the audience and Elsa sang “Let It Go”.

And I don’t remember which kid it was – Jake or Kate – but one of them said, “I wish Daddy was here.” That got me too.

Even my family was surprised at how often the kids mention Jeff. I’m so used to it by now… and, of course, the million dollar question is this: When are they really asking about Jeff, and when are they trying to avoid something, like going to bed or sitting at the dinner table, or putting away their toys? I figure… I’ll take my own advice and try to be right about that 80 percent of the time. I hope I don’t do too much emotional damage.

So many reasons why I’m glad we went to Disney. Not the least of which is that we had a blast. But I also avoided thinking and dwelling too much on a lot of ‘days’.

Father’s Day — although we ‘celebrated’ it before we left, I spent that entire day in the van. I was glad we weren’t at home. I didn’t have to remember Father’s Days spent grilling or playing outside.

The day Jeff got his first infection. Saturday, June 16. As the months went on, we joked that the 16th of the month was inauspicious.

That first infection… brutal. I went back to see what I wrote:

Jeff complained of some back pain this week, and it got progressively worse. He wasn’t sleeping well. This morning, he woke me up at 5:30 and said that he’d had chills for about an hour. After a few temperature readings around 101-102 degrees, we called the oncologist on call, who advised us to go to the ER. We knew infection was a possible complication of chemo, and so anything over 100.4 degrees was communicated as problematic.

So, Randy picked Jeff up and they headed downtown. I had a somewhat normal day with the kids; dropped them off at Barb’s house around 1 PM and then Trish and I headed downtown.

Jeff was still in the ER at that point. Sometime this morning, his fever spiked at 104, and that happened quickly. It was 101.9 at home, and then by the time he got downtown, it was 103. They got him started on fluids and three broad-spectrum antibiotics to get things under control. Luckily, Jeff’s body responded and the fever started coming down. His most recent temperature reading – about an hour ago – was normal.

Because Jeff’s body is responding to the fluids and antibiotics, they can be more calculated with the plan of action. The initial blood cultures indicate bacteria in the bloodstream, so they need to find out what kind of bacteria so they can treat that better. Those cultures should come back within 36-48 hours of being collected.

I vividly remember walking into that ED room — Jeff was in good spirits. I felt the weight of our lives on my shoulders. I bet Jeff did too: but I think, the entire time he was sick, he knew that he couldn’t fix it. And if he talked about it, he’d have to acknowledge it, and then he’d have to acknowledge that he couldn’t fix it. But I — I was stoic.

I remember Randy calling me and saying, “They’re saying it’s sepsis.” This was in the morning, as I was getting the kids ready for a birthday party. I felt ridiculous taking my kids to a birthday party while my husband was at the ED with cancer and a fever… but I knew our lives had to go on. I knew this was a marathon. And I’d do it all again, the same way. Lots of reasons why.

I want to go back to my year-ago self and say, “THIS IS BAAAAAADDDDDDD, JESS!”

I don’t think that anything we could’ve done would have changed the outcome. In fact, being more risky could have made him die sooner.

What if his portal vein was stented earlier? Would that have opened up options? Or, would it have spread the cancer and complicated things further?

And then, as Jeff improved, Kate was diagnosed with Hand Food and Mouth Disease. Jeff couldn’t come home, and although it was only for a few days, I hated having to go visit him at Barb and Randy’s, like Jeff and I were dating. Don’t get me wrong: I am thankful that we had somewhere for him to go, and who better than his parents to take care of him? But, I wanted him home. I wanted our family to be whole.

Jeff sent me this picture to post last year.

You can see, even there, that his stomach is distended. I remember that started happening right when he got home. We thought we had everything managed, and then that happened. I didn’t know it was because of the portal vein thrombosis. I didn’t know it would cause swelling in many other areas of his body. Even in this picture, you can see how thin he was. He would only get thinner and thinner.

I cannot believe that Jeff died six months ago. HOW is that possible?

I miss him so badly. I miss him from the pit of my stomach and the ends of my fingers.

When we walked into Magic Kingdom last week, I cried. So many emotions: how lucky we are that we could go there; how lucky I am, that I have two healthy kids who can go; and how unlucky we are, that Jeff isn’t with us.

I thought of what Jeff would say and how he would react to the kids’ reactions. I thought of how he’d be a man on a mission: using whatever resources he could to make sure we were entertained, fed, and comfortable.

He would’ve been stressed about the heat; about the kids complaining. He might have thought I was too strict on some things (“Jess… it’s so hot, and they’re just little kids!) and too lenient on some things (“Jess… they have ENOUGH toys!”). He would’ve made sure our kids saw things they might have missed on their own (“Guys — there’s a parade over there! Look!”). He would’ve swam with them in the pool and put them to bed at night. And then, he would’ve joined us for a beer and a game of euchre before going to bed early so we could do it all again.

Man, it would’ve been fun if he were there.

As many have said, and it’s true: it’s year of firsts.

This Fourth of July, it’ll be the first time without Jeff. The Fourth is a big deal to the Thomases. A lake, a boat, and grilling are always involved. We’ll all be together next week for it.

I told Trish and Barb and Randy today that I’m dreading it. But what am I going to do, stay at home? We will go. We will cry. Our deepest wish will be that Jeff was there too.

And we will keep living. Sometimes, because we have no other option; and others, because living is such a blessing… and we have no business wishing it away.