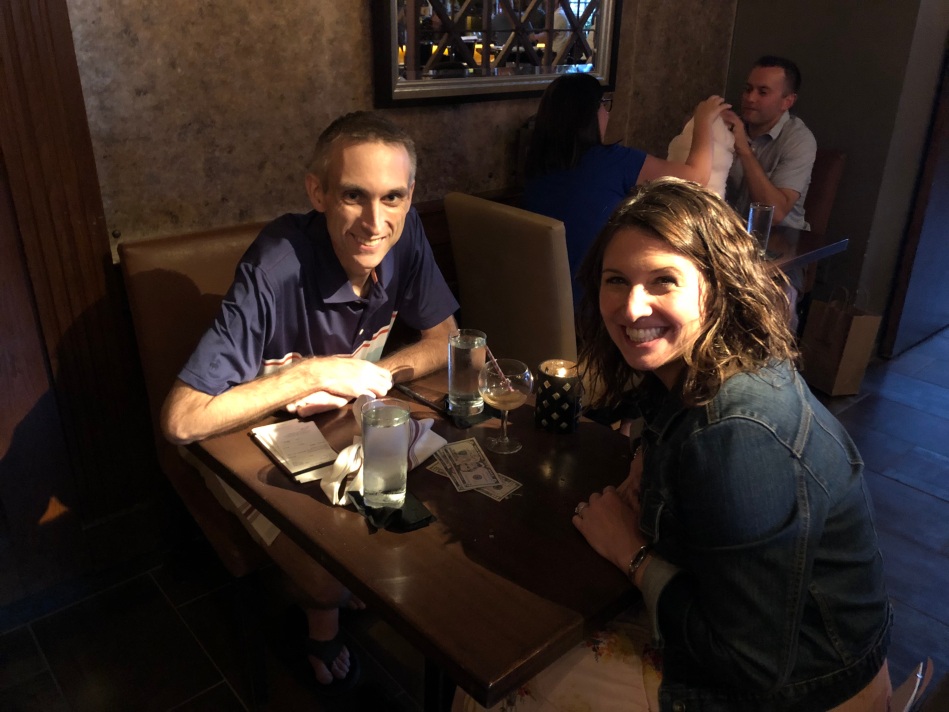 Yesterday, I flew home from Florida. I sat in my aisle seat in row 12, thinking about the last time I was on a plane: I was flying back from MD Anderson. It was October 2018.

I woke up that morning in a recliner chair, which I had positioned next to Jeff’s hospital bed, so I could hold his hand or at least touch his arm. The night before, Jeff had barely walked from his post-op bed to his room bed. After a last-ditch effort to stent Jeff’s portal vein – which failed – Jeff had foot drop and couldn’t walk without braces or a walker. He needed help until he died.

That night, I knew he was struggling. I knew things were bad. At one point, I didn’t hear him breathing or moving, and I felt for his pulse. I have no idea exactly how to feel for a pulse, so I fumbled with his wrist.

“Are you feeling my pulse?” Jeff slurred.

“No!” I reacted, not wanting him to sense my alarm. But then I relented, “Yes. You weren’t moving. I couldn’t hear you. I was scared.”

He didn’t answer. Just fell back asleep. I wondered if I had done the right thing: being honest.

The last few weeks have been a strange montage of memories. First, it was the Fourth of July, with all its memories of being at a lake and grilling meat and skiing. Then, there was our 10th wedding anniversary. I very gratefully spent that evening with Barb, playing Scrabble, and remembering that once-in-a-lifetime party. And then it was Jeff’s birthday. I was shocked by how many people not only remembered that it was Jeff’s birthday, but reached out to me or Barb or Randy. We had that tailgate at his grave. It ended up being good for all of us: cemeteries are for the living.

Then I had a sorority reunion. I graduated from Purdue 15 years ago… a lot of life has happened since then. I parked in my old parking spot right behind the sorority, where I packed up my Honda Civic the night before graduation, and Jeff came to say goodbye, and he confessed that he had liked me for three years. As I recalled that memory, I cried. I ached to go back to that moment.

When he said that, I wish I would’ve been honest: “I really like you too! But I’m unsure of where our lives are going, and I’m scared.”

In that moment 15 years ago, I said nothing.

On the way to that reunion, I drove with a friend. We, of course, talked about Jeff. She recommended a book called Being Mortal by Atul Gawande, a surgeon at Brigham and Women’s Hospital. I read it this weekend (some light beach reading), and so much resonated with me.

“If we shift as we age toward appreciating everyday pleasures and relationships rather than toward achieving, having, and getting, and if we find this more fulfilling, then why do we take so long to do it? Why do we wait until we’re old? The common view was that these lessons are hard to learn. Living is a kind of skill. The calm and wisdom of old age are achieved over time.”

But then Gawande summarizes work by Laura Carstensen, a Stanford psychologist, “What if the change in needs and desires has nothing to do with age per se? Suppose it merely has to do with perspective – your personal sense of how finite your time in this world is… How we seek to spend our time may depend on how much time we perceive ourselves to have… It’s perspective, not age, that matters most.”

If we agree – and it makes intuitive sense to me – then I think that’s a gift. The paradoxical truth is that being reminded of our own mortality actually makes us more alive. I go back to O’Brien’s line from The Things They Carried, “You’re never more alive than when you’re almost dead”; or Quindlen’s line from A Short Guide to a Happy Life, “Knowledge of our own mortality is the greatest gift God ever gives us.”

The words we say to ourselves become our perspective.

But sometimes the genesis of our words are someone else’s. The hope during Jeff’s illness came not from Wikipedia or the Mayo Clinic pages on cholangiocarcinoma: most of what you read online is dismal. But the hope came from doctors… maybe Jeff could navigate it. Maybe he could get a few more good years. We clung to that hope like we were free climbers who had slipped, and the doctors had thrown us a rope. We looked up the side of that cliff in desperation and thankfulness.

But at some point, people’s words cannot be your own. I sometimes wish that Jeff had stopped treatment sooner. He spent so. many. days in the hospital. What if he had spent those at home? What if the doctors had said – even sooner than October – “This is it”? Or, in October, what if they had pushed back on our attempts to find clinical trials? At the time, I might have seen them as executioners.

Gawande highlights one such similar case: a 34-year-old woman in her last months of pregnancy, diagnosed with lung cancer. She gives birth to a totally healthy little girl. And then she does battle on the cancer, even though the prognosis is grim, and treatment is hard. I would’ve done the same damn thing before I watched Jeff die.

Gawande narrates as things get bad for this woman: “A few days before Thanksgiving, she had another CT scan, which showed that the lung cancer had spread: from the left chest to the right, to the liver, to the lining of her abdomen, and to her spine. Time was running out.

This is the moment in Sara’s story that poses our difficult question, one for everyone living in our era of modern medicine: What do we want Sara and her doctors to do now? Or, to put it another way, if you were the one who had metastatic cancer – or, for that matter, any similarly advanced and incurable condition – what would you want your doctors to do?”

I felt tears in the outside corners of my eyes as I read that. Because I wish Jeff and I would’ve had the words to talk about that. exact. thing. What did he want his final days to be like? And just like you don’t talk about a deep-seated marital issue in the middle of a heated fight, you don’t talk about life-or-death matters once it’s life or death. It’s too hard. Jeff and I should’ve talked about it years beforehand. We had planned for children, for retirement, for vacations and college. We should’ve talked about what we want, once our time runs out. Not just whether to be cremated or buried. Not just one cemetery over another. But what to do when you know your expiration date.

Gawande highlights this importance: “In 2008, the national Coping with Cancer project published a study that terminally ill cancer patients who were put on a mechanical ventilator, given electrical defibrillation or chest compressions, or admitted, near death, to intensive care had a substantially worse quality of life in their last week than those who received no such interventions. And, six months after their death, their caregivers were three times as likely to suffer major depression.”

But I hadn’t had the words beforehand – I didn’t see the need or have the perception that our time was short. So, I had the life-or-death talk during a life-or-death situation: when I told Jeff it was time to come home. To accept hospice care.

I don’t know what would’ve happened if Jeff had stopped treatment sooner… if he had accepted hospice care. Maybe he wouldn’t have lived as long… but would he have lived better?

Gawande writes about this too: “Like many other people, I had believed that hospice care hastens death, because patients forgo hospital treatments and are allowed high-dose narcotics to combat pain. But multiple studies find otherwise. In one, researchers followed 4,493 Medicare patients with either terminal cancer or end-stage congestive heart failure. For the patients with breast cancer, prostate cancer, or colon cancer, the researchers found no difference in survival time between those who went into hospice and those who didn’t. And curiously, for some conditions, hospice care seemed to extend survival. Those with pancreatic cancer gained an average of three weeks, those with lung cancer gained six weeks, and those with congestive heart failure gained three months. The lesson seems almost Zen: you live longer only when you stop trying to live longer.”

Hospice would’ve seemed like defeat. But in reality, it would’ve been winning. In reality, when you accept death, you beat it. You beat cancer. You win.

And in the end, Jeff did come home. He died a few feet from where I’m typing, and I find comfort in that. He wasn’t hooked up to anything. He was in our family room. I hope he was glad to be home. I’m glad he died here.

I’m not losing sleep over wishing we would’ve done things differently with Jeff. In one sense, things happened how they did because Jeff was who he was: he needed to know that everything had been done. He had a responsibility to and deep love of me and the kids. He was going to do absolutely everything he could to stay here.

But words are important.

“People die only once,” Gawande writes. “They have no experience to draw on.”

All of us have to help, if we can.

I don’t know the line between fighting and accepting, between treatment and hospice. But the memories of these last weeks and remembering the last year seem to add up to this: we should attempt to find the words.

As Gawande puts it, “The battle of being mortal is the battle to maintain the integrity of one’s life – to avoid becoming so diminished or dissipated or subjugated that who you are becomes disconnected from who you were or who you want to be… whatever the limits and travails we face, we want to retain the autonomy – the freedom – to be the authors of our lives.”

It’s easy for me to sit here and type all this, like I know what I’d do if I had months to live. I don’t. But I also know that I should find some words for how I’d like to author the end of my story. And I should help others find words for the end of theirs.