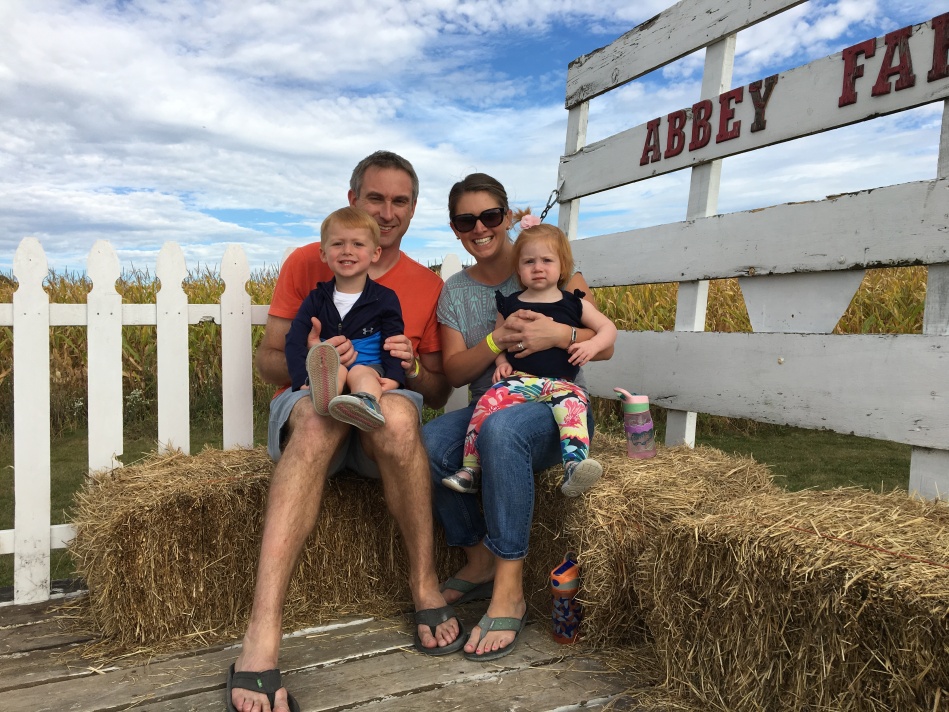 It was 6:15 a.m. last Tuesday. The kids and I were in the car, driving down the road, heading East. We were driving into the sunrise, and the horizon was a pink-and-purple beautiful. The kids asked to listen to music. I put my songs on shuffle.

“Forever” by Chris Brown came on. And immediately, my mind and heart were transported to 10 years ago.

It’s not an epic memory. It’s not life-changing.

Jeff and I were living in our first place together: an apartment on 5th Avenue in Downtown Naperville… only blocks from where he’s now buried. It was a two-bedroom, one-bath apartment with old carpet and exposed brick walls. Our building was a furniture factory-turned-apartments, and we were steps away from the train station. We loved it.

It was a Thursday night, 10 years ago. The leaves were turning brown outside. The air was chilly. I’m sure Jeff and I had both worked that day; I’m sure we were both tired. But The Office was on, and we always watched.

It was the Jim and Pam wedding episode — the one where they get married at Niagra Falls, and then go back for the chaos that is their church wedding. In 2009, there was a cult movement of doing cool wedding party entrances to entire songs… these entrances were choreographed and theatrical. Some were very cool. And when all of The Office employees did one at Jim and Pam’s wedding – to “Forever” by Chris Brown – Jeff started sobbing.

I almost laughed at him. But I’m so glad I didn’t. I’d only seen him sob one other time in his life. I looked over him, incredulous, and – through sobs – he said, “I am just so glad I married you. I’m so glad we’re married.”

Of those millions of moments, lots of them stand out from this time of year. Fall is my favorite season. For me and Jeff – and then, eventually, me, Jeff, and the kids – fall meant pumpkin patches, apple orchards, and football. It meant tailgating (Do you know that Jeff had a tailgating checklist? It is quite comprehensive, and involves several whole pineapples – for coring and using as cocktail cups – as well as a blender that can be plugged in to your car). Fall meant weekend carnivals with the kids, and carving pumpkins. It meant crisp days… warm in the sun; cool in the shade; cold in the breeze. It still means all of those things, but in another universe, it would stop there. Fall would simply mean all of those things.

But fall is different now.

Barb’s thought is that everything feels so fresh, so raw, because we’re beginning the season when Jeff died. We’re coming up on a day when we won’t be able to say, “A year ago, we were…”

The past several weeks have been brutal. Barb, Trish, and I have all talked about how we miss Jeff so intensely. Last Sunday, I just couldn’t stop crying. I was home with the kids, and I felt such guilt as a mother — I couldn’t pull it together. Everything upset me. It didn’t feel like a disaster: I could physically care for myself and the kids, so I didn’t call anyone.

In another universe, that Sunday would’ve been like the others Jeff and I shared: we would’ve taken turns going to church in the morning. We would’ve been busy all day with laundry, mowing the lawn, trying to get in a workout. Jeff would’ve planned something fun for dinner, with an accompanying cocktail planned as well.

I don’t know that it’s gotten harder, but I’m not sure if it’s gotten easier. It’s definitely not the same. I can’t figure it out. It’s all a jumble of mess.

I recently had lunch with a friend. She said, “You seem… happy.”

But every time I’m with people, I feel like I plop down my baggage on the table in between us and say, “Hey — if you could just talk around this thing, and talk LOUDER then maybe I can hear you over my grief!”

I know this week will be especially emotional, because this was the week when Jeff got the bad PET scan results.

I lived and have relived those moments.

We were sitting in a typical exam room: me, Jeff, and Barb. We had been there many times before. Barb and I were sitting in two chairs against a white wall. Jeff was sitting on the exam table, with his legs dangling over the end. His shoulders were hunched. He was in his winter coat, shaking from the chills, a symptom of another blood infection. His legs and ankles and feet were swollen from the overwhelming amount of ascites — I had stretched his shoes to be bigger, to fit his swollen feet.

Jeff’s doctor came in the room. He did a short physical exam of Jeff, feeling his swollen angles and looking at his swollen legs. All three of us looked at him with big eyes, bated breath, and deep longing that what he was going to say would be different than what all of us feared.

He said a few words… I don’t remember what. But I do distinctly remember him saying, “There’s nothing else we can do.”

The doctor’s eyes welled up with tears.

I felt cold. I felt a lightness throughout my body. I looked at Jeff, but he was looking down.

We talked about clinical trials, but the doctor cautioned us that many would be unavailable because of the ascites and portal vein thrombosis. This all turned out to be true, but in the moment, we hoped we could learn something that he didn’t know.

After the doctor left, I walked over to hug Jeff, my arms outstretched. He said, “NO! DON’T!” So I put my arms back down at my sides.

We waited for someone to escort us over to the hospital — Jeff was directly admitted for his blood infection. There was a period of time when Barb went somewhere, and it was just me and Jeff. I didn’t know what to say or do. The two of us sat in that hospital room, Jeff shivering from fever, and me shivering from panic. I so badly wanted to hug him. He so badly did not want to to be touched.

Jeff looked at me.

“I thought he’d say it spread,” he said, “like to my lungs or something. I didn’t expect him to say that.”

Barb and I drove home that day, crying all the way. I tried to get home to put the kids to bed — a decision Jeff and I made early on in his treatment: we would prioritize normalcy for the kids as much as possible. Barb spent the night, and we cried and clung to each other. She kept saying, “I can’t believe this is happening to you and those babies. I can’t believe this is happening.”

Jeff was at the hospital by himself for that afternoon… something he wanted. I think Randy or Trish went to the hospital that night.

If I had it to do over, I would still choose to cut my time short on myriad hospital visits, so the kids had one parent at home. But I go back to this day: I wish I would have stayed. Jeff found out that he was going to die, and soon, and as much as he wanted to be left alone, I wish I wouldn’t have left. Both for me, and for him.

In another universe, I stayed. Jeff was annoyed, but deep down, he was glad.

In another universe, the doctor said, “We’re not out of the woods yet, but things are looking up! We have another treatment for you!”

In another universe, Jeff had hepatitis instead of cholangiocarcinoma.

In another universe, Jeff didn’t have cancer at all.

In another universe, Jeff is sitting right here beside me, and we’re watching reruns of The Office, laughing about that time he sobbed during “Forever”.