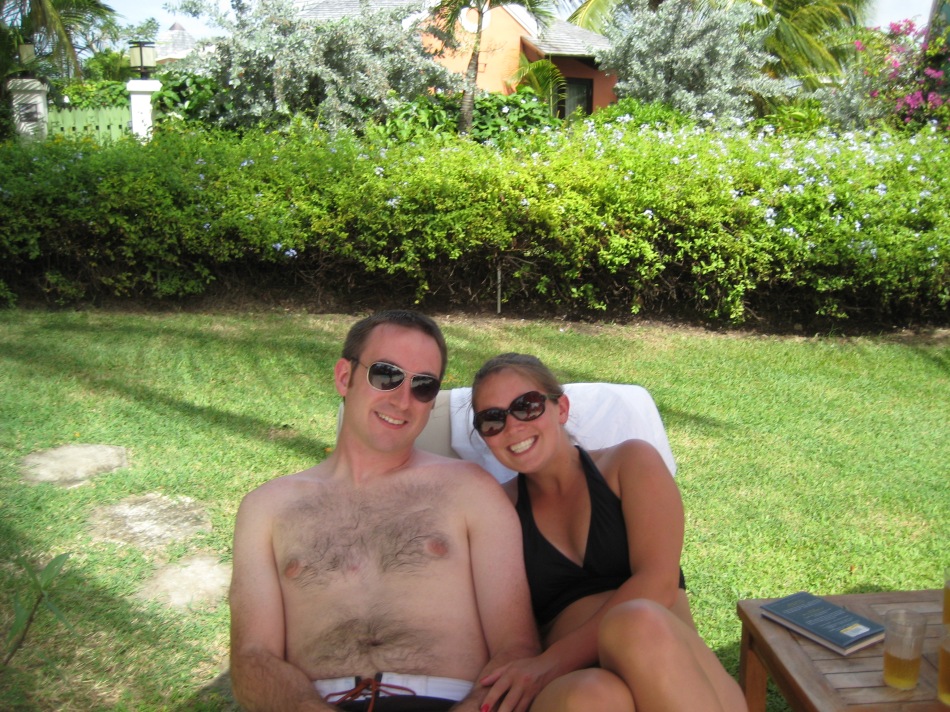 It might be one of my life’s great ironies that I read The Year of Magical Thinking by Joan Didion on my honeymoon. Yes… honeymoon. I don’t think I quite realized what it was about when I packed it among my sundresses, swimsuits, and flip-flops. But once I started reading, I couldn’t stop.

“You’re reading a book about what?!” Jeff asked incredulously.

And then Jeff would go play volleyball in the pool, and I would lay in the cabana and read Joan Didion’s memoir about the year after her husband died — her year of magical thinking.

Now I’ve also had a year of magical thinking. And that year started when Jeff’s life ended.

Watching Jeff die was something I was both completely prepared for and also something that nobody can prepare for. Jeff had suffered. We had knowledge that he would die. We knew this. But watching it was something completely different.

By the time he came home on hospice, the Jeff I knew existed in snippets, followed by longer durations of unconsciousness and pain. His spirit was stuck inside a body that no longer worked. During our marriage, Jeff and I were emotionally tight. I wanted so badly to be emotionally close to Jeff during the worst thing that had ever happened to either of us, and yet, that was impossible because it was happening to him.

Jeff came home for the last time on a Sunday night around 9 p.m. On Tuesday, we were having a discussion about keeping him comfortable, when reality settled on my heart. It had been there, of course, but now it added weight exponentially. In this specific conversation, Jeff was awake and helping us problem-solve. I started crying, and Jeff said to everyone, “Can you give us a minute?” Everyone walked to the other room.

“What’s wrong?” he asked. He was genuinely empathetic and worried and reminded me so much of my Jeff.

I sobbed, weighed down with grief. I held his hand and put my head on it. I couldn’t verbalize what upset me, not because I didn’t know, but because most of him was gone, and he couldn’t reason anymore. I hesitated, and just like that, the moment was over. His personality snapped.

“I don’t understand what the problem is,” he said. “We know what needs to be done! Why isn’t everyone doing it?!”

He was agitated and got louder. So, I also snapped out of it. I wiped the tears, knowing that this angry person was not Jeff Thomas. It was the shell of him, who was captive to the chemistry experiment gone wrong in his brain, body, and cells. I called everyone back in the room, and we did what we had to do.

A few days later, when the bowel obstructions and low blood pressure and blood infection finally reached their climatic moment, I knew that — despite all of the changes that had already happened in eight months — life would change again. And I couldn’t see more than few days in front of me.

I felt numb for months. To feel joy also meant opening myself up to feel pain, so I avoided both with most people. Feeling seemed safer to do alone or with people who were there in those final days. I wrote Caring Bridge posts; read the Bible; pored over Jeff’s medical files. I did it all with a box of tissues: writing was for my soul what a juice cleanse is for the body.

During those months, I did some things because I wanted to; some because I had to; and others because well-meaning people thought I should. My children topped the list of priorities. We kept daily routines; we normalized conversations around death and Jeff; and we planned fun things to do. Our families and close friends sustained us. I saw my psychologist every week. I went to yoga twice a week. I read every night. And taking an extended leave from work was among the best decisions I made.

Around June, I started to feel again. Joy felt more joyful, and not like a trick. In August, I started a new job and the challenge made me realize that the changes inside me went far deeper than I knew.

I can’t say that I’m not afraid anymore, but I am not afraid of things like I once was. The worst thing imaginable has already happened to me. Another worst thing might happen to me yet. But I know that being afraid isn’t how I want to spend my time until then.

I miss Jeff every day. I’ve learned to coexist with the fact that I always will. Well-meaning people might see that as fatalistic or cynical, to which I say that this kind of grief is the sign of a deep and lasting love. I also say that grief is a wonderful gift: to know pain is to also have the capacity for great joy. In fact, I think it’s arguably only through pain that a person can know great joy. Grief is also a wonderful teacher. It’s been my life’s greatest instructor.

Sometimes, I’ll hear a comment that implies a timeline for grief. “Geez — it’s been a year!” I might hear someone say, implying that certain arrangements, emotions, or logistics should be figured out by now.

And to be fair, some of that is true. If I had no control over my finances; if I wasn’t seeing a psychologist; if I wasn’t speaking with my children’s teachers about their grief, I would be remiss. But grief, grieving, sadness, pain… it is the awareness of those things that actually gives me the capability to handle the necessary things.

The truth is that grief is lifelong… a companion that is always there, whether we see it with our peripheral vision or not. Sometimes, grief holds our hand; sometimes, it pinches our shoulder. Grief is always talking, and we have to be brave enough to listen. But never, ever does grief go away. In the beginning, this companion looks like the Grim Reaper, complete with a scythe and black cloak. But if we listen, that companion can become as beautiful as what or who we are grieving. We decide what grief will look like, but it’s our companion all the same.

I want to relive Jeff’s last week like I want to relive my children’s births — in great detail, and with anyone who will listen. I could go minute by minute; emotion by emotion; action by action. I have read and reread every Caring Bridge post for these days — indeed, I vividly remember writing each one of them. I want to share the story with the people who knew us and loved us both, and who knew our marriage and our kids, because I know we care equally about every detail. But the real kicker is this: I want to share it with Jeff.

I want to know what he thought and felt. I want to know what he’s done this year, and if he’s really been guiding me like I think he has. I want to know that he’s happy and safe and loved… I know this deep down, but I wish I could picture it. Did Jeff really ride off into the horizon on his bike… no helmet, clipped in, and with the wind at his back? Has Jeff really become part of the communion of saints, and is he working to help others who are in despair, and who are sad and lonely and alone? (I want to give him a high-five for this.) Did he really get to the other side and think, “What is everyone so worked up about with this dying thing?!” Does he really visit our children in their dreams, and are they telling the truth when they wake up and say, “I had a dream about Daddy” — is that all true?

And grief, my companion, has an answer to that.

Because when I get stuck in those hypothetical questions, I miss the profound. I miss the fundamental, the formative, and the transcendent.

So much has changed. So much more will change. But I’m proud of myself and I’m proud of those of us close to the nucleus. We have given meaning to Jeff’s death – and therefore, our own lives – by how we have conducted ourselves in the days that have followed it.

This year gave me the capability to pray this prayer with appreciation and humility:

If I could go back to that girl in the cabana on her honeymoon so many years ago, there is so much I would want to tell her. But I know she has to figure it out for herself.

And in 10 more years, another girl will be looking at me: a version of myself I don’t know yet, and maybe won’t even recognize. She will have gone through happy seasons and sad seasons; she will have wished every day that her husband had not died, and also realized every day how thankful she was to be alive. She will have a whole new set of memories, and – by way of those – capacity for deeper and wider emotions. She will be different than I am.

I don’t know exactly who that girl will be yet. But I’m excited to meet her.