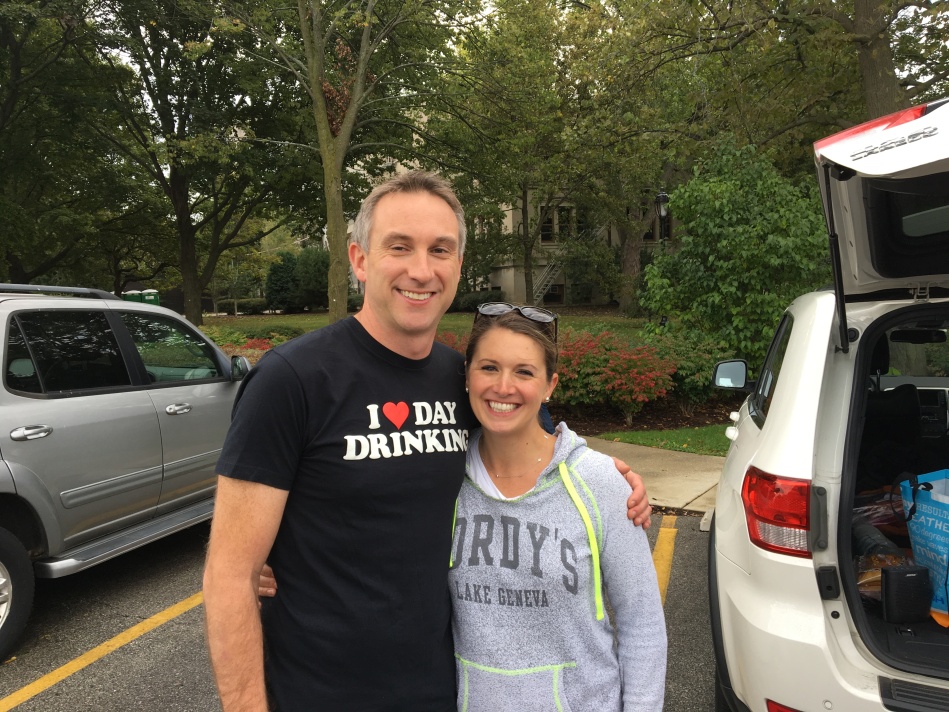 The kids and I are camping in our house: it’s getting a facelift. Thankfully, our bedrooms are in tact, but what “kitchen” we have is in the garage: our refrigerator and a microwave. No range. No dishwasher. Other items from our kitchen – the pantry items, the reusable bags, the fruit, the Pyrex – clutter our family room. Our kitchen table is also in our family room, giving it the feel of a studio apartment. The ceiling tiles are removed from our basement ceiling. Plastic and zipper walls line most of the house. It’s cozy and mostly fun.

When I told a friend about this project, she said, “Is this something you and Jeff had planned, or is this Jess 2.0?”

We would’ve done projects around our house and had plans to. But this one was all me. And other parts of my life are the product of my sole decisions, some of which, Jeff would not have made.

I was at a friend’s house several months ago. We were playing a “what if” game. As we were playing – and I was completely enjoying myself – I said out loud, “Omigod. Jeff would’ve hated this game if he were here.” My friends nodded in agreement. We laughed.

Jeff would not have liked this blog. (And even if he did, if he were alive, I have no idea when I would write.) Jeff didn’t read the Caring Bridge posts until he received the news of his bad PET scan. And even then, we NEVER talked about what I wrote. I often hit “publish”, nervous about what Jeff would think. Had I shared too much? Had I editorialized too much? Was he okay with what I said? I don’t know if he read the Caring Bridge posts from the time of his diagnosis, or if he went back and read them all. And if he did, I wonder what he thought. I wonder if he was bothered or relieved or surprised or concerned.

We would not have gone to Disney World last summer. Jeff and I had talked about taking the kids to Disney, but he thought they were too young — that we should wait until they were a bit older. I disagreed, but conceded. But Jeff wasn’t here to disagree last year. So, we went.

Because we went on so many trips last year — and one of those trips included a seven-hour car ride, each way, with just me and the kids — I bought them each a Fire tablet. Jeff was vehemently opposed to tablets, and I agreed with him. But, he wasn’t here to drive while I navigated and took care of the kids in the back seat. So, I bought the tablets.

I ache for Jeff’s point of view on things. I loved his practicality; his lack of superficiality; his level-headedness. In its absence, I always think about what Jeff might have done. But sometimes – even when I know what he might have done – I don’t do it. Because circumstances are different, and I am different, and – for better or worse – the decisions are up to me.

Other times, I do exactly what Jeff would’ve done.

I didn’t go to church every Sunday before Jeff and I got married. I can probably count on two hands how many times I went to church in college. But Jeff taught me that we make time for what’s important, and that our habits display our values. I can say unequivocally that getting myself and two kids ready for church is awful. I can also say that I sometimes don’t hear any of the readings. But the fact that we make the effort is communicating something to myself and my kids that is fundamentally essential and important. So, we go. And whether or not I hear the readings or take the kids to the bathroom twice during mass isn’t as important as the outward action that we have a shared humanity with others, and that there are forces at work which are far bigger than any of us.

Last night, a friend asked me how I was doing. I replied that the kids and I were doing better than I thought we would be. I am happier than I thought I could be. That we are basically okay.

It’s the loneliness that’s insurmountable. Jeff’s and my life were so enmeshed — we had interests and hobbies separate from each other, but we were each other’s home base. The amount of times I thought of Jeff during the day; the texts I would send; the decisions we would make about parenting or dinner or weekend plans; the shared life experiences… it simply is not as much fun without him. And rather than try to assuage that sadness with some crazy hedonistic indulgences, I’m choosing to accept it. To some, that may seem defeatist. But loneliness and happiness are not mutually exclusive. A meaningful life and sadness are not mutually exclusive. Indeed, I think it’s easy for them to coexist, and one actually contributes to the other: my life has meaning, but it makes me sad that Jeff isn’t here to share it with. And also, because of that sadness, I know that each day is an absolute gift, filled with opportunities.

One of Jeff’s cousins suggested I read two different books by David Kessler: Visions, Trips, and Crowded Rooms and The Needs of the Dying. I’ve gone nuts with annotations, but the idea that I keep coming back to is this: the needs of the dying are not unlike the needs of the living. The difference is that those who aren’t actively dying have the luxury – if desired – to ignore these needs.

There’s a whole list, but here are a few highlights:

My mind keeps going to two places as I read The Needs of the Dying.

The first is Jeff, of course. I keep wondering if I gave him what he needed to die. The first bullet haunts me. I don’t know if I did that. Kessler writes, “When our loved ones first become sick, it is easy to see them as being whole people with a little bit of disease. As the illness progresses, however, our loved one seems to become less of a person and more of the disease. We begin to have difficulty seeing the whole individual. At that point, when things are toughest, seeing our loved ones as whole means the most to them. Seeing beyond the illnesses is one of the most meaningful gifts we can give them. It is a greater gift to ourselves.”

Toward the end, I was so exhausted that I don’t know if I treated Jeff like himself, and as I think about it, I also realize how difficult that can be. A relationship with someone – especially your spouse – has nuances and behaviors that are honed over years and in the most intimate of moments. When Jeff suddenly couldn’t respond – verbally or physically – in ways that were within the parameters both of us had come to know as the basis of our relationship…. life was so unsure that even the laws of physics seemed questionable.

The second place my mind is going is to my students. I think about the students, especially, who have tough circumstances. I wonder how often teachers and administrators – well-meaning authority figures in their lives – talk to these students like they are their disadvantage, rather than a whole person. I know I’ve done it: seen a kid as a condition or a circumstance. A few tweaks to any of those bullet points, and it easily becomes a list of needs for almost any situation:

Death and the dying have so much to teach the living about life. Kessler writes, “We can cry with our loved ones, we can analyze treatment strategies, we can disagree, and we can deny the situation entirely, but in the end, the best thing we can do is listen. And when they tell us that the end is near, we need to listen even more carefully.”

I’ve looked back at a lot of the Caring Bridge posts from this time last year. I kept writing about how my identity would change, and who I would be if I was no longer a wife, but a widow. If I was no longer in Jeff’s social circles and attending his functions and talking to him about groceries and errands and diapers…. then what did that mean?

And to some degree, I’ve answered that question. Whether it was Jeff dying or my kids getting older or accepting a new job or renovating my house, my life events will change the way I see myself. Most of that happens gradually and with little awareness that it has happened until you look back and say, “Omigosh — remember when we used to…” or, “Wow — I can’t believe how long it’s been since…” But when someone dies, time is clearly marked as Before and After, and a process that usually happens gradually is brought to the surface and examined.

I miss the old version of myself. But Jess 2.0 is the renovation. Like my house, my outside looks pretty similar to before… but the inside is down to the studs. I’m rearranging rooms and changing the layout. I’m keeping the memories of the house, but changing the way I live in it. I hope I never go through another renovation as major as this. But if I do, I know I can survive it.

New post, Thumbs Up, is linked in bio. 💚
New post, Adulthood, is linked in bio. ❤️
I keep forgetting to post here, but I haven’t stopped writing. I think there are a few new posts since I last checked in. The most recent one - Rocks, Waves, and Milestones - is the newest. Linked in bio. (And this is Jeff with a few-minutes-old baby Kate.) ❤️
Of those millions of moments, lots of them stand out from this time of year. Fall is my favorite season. For me and Jeff – and then, eventually, me, Jeff, and the kids – fall meant pumpkin patches, apple orchards, and football. It meant tailgating (Do you know that Jeff had a tailgating checklist? It is quite comprehensive, and involves several whole pineapples – for coring and using as cocktail cups – as well as a blender that can be plugged in to your car). Fall meant weekend carnivals with the kids, and carving pumpkins. It meant crisp days… warm in the sun; cool in the shade; cold in the breeze. It still means all of those things, but in another universe, it would stop there. Fall would simply mean all of those things. But fall is different now. New post, In another universe..., is linked in bio.