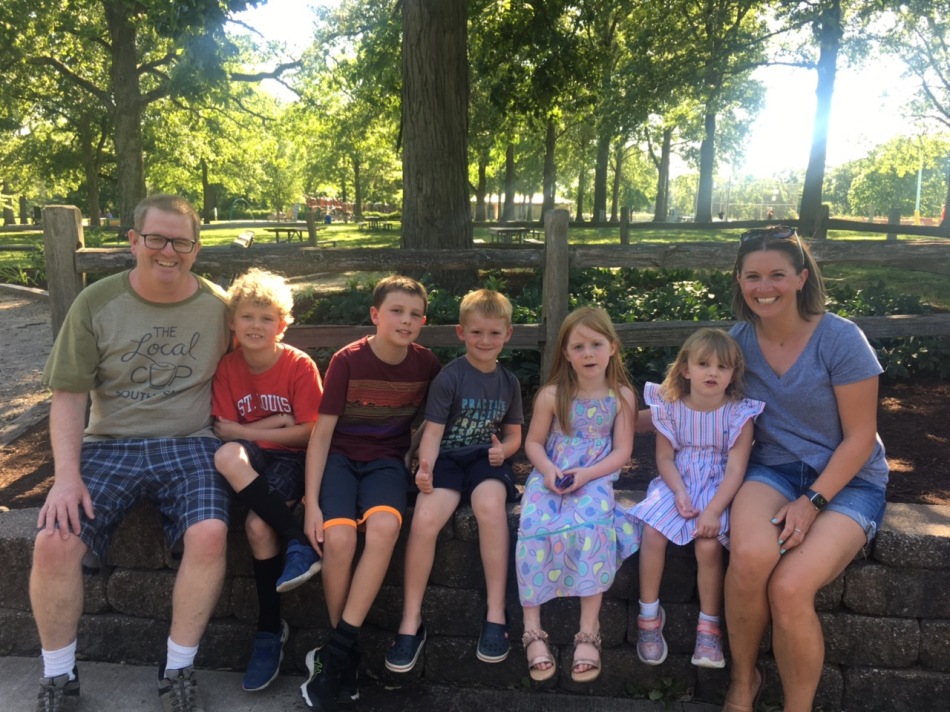 I haven’t written in a while.

It’s not for a lack of ideas in my head. It’s because I’ve been making plans.

You see — Mike and I are engaged!

It all started with a once-a-week Sunday night phone call. When I last posted almost a year ago, we were just at the beginning of it. Since then, we’ve gone on long road trips and vacations together. We’ve done bedtime routines together, celebrated birthdays together. We’ve planned dinners; planned Christmas presents; planned date nights.

“Good. Because I’m definitely in love with you,” I had said.

And in almost that same exact spot – the spot where we first shared those true and vulnerable feelings – Mike asked me to marry him.

The ring is a combination of stones from my engagement ring from Jeff, and stones that Mike picked out. I love it for all of the reasons you can imagine.

Being engaged to Mike is like finally being able to see out of a window that has been covered with dirt and smeared with raindrops: things seem clearer, better, more beautiful, more crisp. Mike sees the best in me and others; he loves all five of our children; he’s wicked smart; and he can pivot from a conversation about the St. Louis Cardinals to any Gospel reading you’d like to discuss to the latest story on NPR (and he’d probably be able to also tell you which host narrated the story). And, of course, there’s also the virtues and hilarity of Benny, Basil, and Mimi.

Mike and I had talked about getting engaged. I knew it was coming. We own a lot south of Notre Dame’s campus, and an excavator just started digging a hole there. But in the weeks after he asked me, I started clinging to everything I saw that would change.

I realized I would actually resign from my job.

I realized my kids would actually move schools.

I realized I actually wouldn’t be as geographically close to friends and family whom I love.

I realized I would start a new job, possibly a new career. I would make new friends, find a new hairstylist, find new places to shop, new routines, new habits, new … so much new.

I think it’s fair to say that I freaked out.

Sorting out my feelings was difficult. I love Mike. I love Benny, Basil, and Mimi. That was never in question. But man, the overwhelming thought of everything — it’s so hard to imagine a life when there are so many more moving pieces. This wasn’t like when Jeff and I got engaged: where we were starry-eyed 26-year-olds with new careers and a little bit of money in the bank. No, this was all new. Now there were careers and children and the children’s lives and mortgages and living wills.

So, Mike and I did what I think is our relationship superpower: we talked.

We are really good at talking. And I don’t mean just words being said out loud: I mean that Mike really listens, and I really listen. We ask questions and get to the real issue. We challenge each other and support each other.

The decision for the kids and I to move to South Bend was one that I made after several conversations. Mike and I would play out the scenarios.

“Okay, if you move to Illinois, where could you work? Where would we live? Where would the kids go to school?” I’d ask.

“Okay, if we move to South Bend, what would that look like?” we’d play out.

We played the game of scales: who would be ‘giving up’ the most. But going into a conversation from a deficit framework is exhausting and competitive. Instead, we asked, “Where can the seven of us grow the most?” The answer to that question was clear: South Bend.

But even with all the conversations and mutuality, I still couldn’t fully grasp what was happening.

I talked to my therapist.

“I hate the phrase ‘second-guess’ because nobody uses it in a positive way,” he said. “But if you weren’t second-guessing all of the changes you’re about to make, then I would worry that you didn’t fully apprehend them.”

And when it came right down to it, I realized something: I was hanging onto a reality that would never stay the same.

My kids will get older. Their relationships with me will change; they will change their interests and behaviors and habits and routines. And that is good. Because I cannot live their lives for them. I just get to sit front row to the lives they choose to live.

My friends and even family will change. People will have priorities that shift or routines that adjust or surprises that happen. And that is good. Because life is about living, and living means that things happen.

And let’s complete that thought experiment: let’s say that I stayed, and things changed as they do. I could still be happy. But that life will bear little resemblance to the play I’ve constructed in my head. Because that’s just not how life works.

And here’s the bottom line: I don’t want to stay. Because that future life doesn’t have Mike and Benny and Basil and Mimi in it. And now that they are part of the story, I don’t want to write it without them.

So even though I was clinging to all I saw that would change, it was going to change anyway. It’ll all change. Clinging to one life doesn’t preserve it. In fact, it wrings the joy out of it.

I have this image of some monkey bars. They’re the colorful kind you’d find at a playground: bold yellows and blues and reds. And I am clutching those monkey bars. I’m high off the ground — not the normal height of a kids’ playground, where falling would basically mean putting my feet down to stand up straight. No, these monkey bars are 20 feet high, with concrete under them. My arms are exhausted, and I’m so afraid of falling. People offer to help, but I’m still too afraid to let go. I can barely concentrate on what they’re saying, because I’m so focused on holding on. There’s no joy, no release, no relaxing. It’s constant worry, constant pressure… and despair creeps in. Because if I let go of the concentration for even just a second, I could fall and break every bone I’ve got.

But there’s another version of this image.

But I finally hear someone saying – not yelling, but in a normal voice – “Just let go.” And finally, I get it.